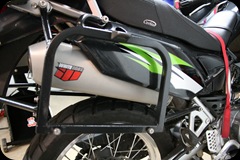 The Klr muffler has been growing louder in this last season of riding. It’s now three years old and about 9500 miles on it. Not a ton of miles but you have to figure one large cylinder pulsing and beating the muffler packing can’t last forever. 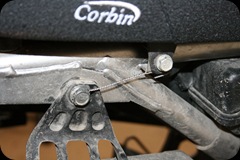 This is one thing I’m getting used to doing with bolts so they don’t vibrate out. Safety wire is your friend on a bike that has a large amount of vibration. The KLR has a know reputation for loosing nuts and bolts. So much so that many riders have had their mufflers fall off on the street. Eventually Kawasaki made it a recall to come in and have the bolts re-torqued.

You can buy a spool of safety wire and the pliers for under forty dollars. The hardest part of the job is removing the bolts to get a small hold drilled through the bolt head. 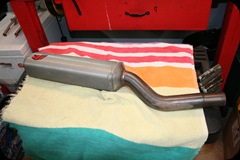 off of the bike and ready for tear down. 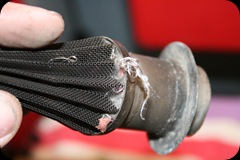 This is the spark arrester with the broken down packing material blown into it. 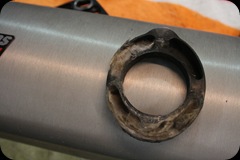 This is the spark arrester trim ring with more packing stuck in it.

Last spring I had the trim ring powder coated with a few other pieces from another bike and the ring was perfectly clean of any packing. I’m pretty surprised how fast it degraded. 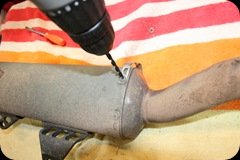 Drilling out the rivets was event free with a nice new drill bit. 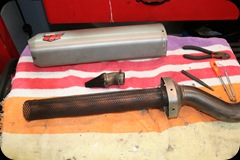 muffler torn down and ready for a fresh roll of insulation. 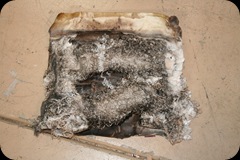 This is the old pack and it was destroyed. 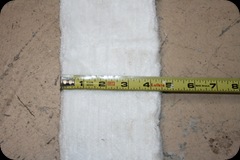 The new insulation was a Two Brothers repack kit that worked perfectly. Above is all I had to cut off the roll they sent me and the rest squeezed in with some work. 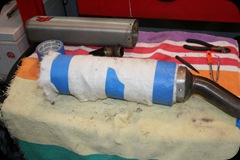 I used painters tape to hold the insulation down. 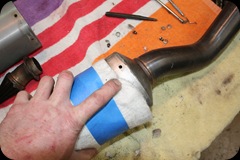 First thing was to tuck the insulation under the flange lip so the can edge will slip over nicely later. 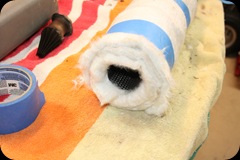 The overhang is no big deal since stuffing it in the can will force it back perfectly. 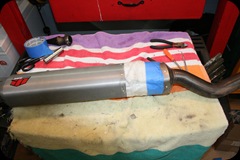 Can is almost on and getting to be more a challenge as the core went in. I also removed the hold down tape before it disappeared into the can. I could of left it on but I didn’t want it rolling and sticking to the inside of the can. 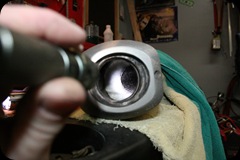 The core needs to be centered at the end of the Can. I still have a way to go. 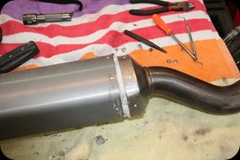 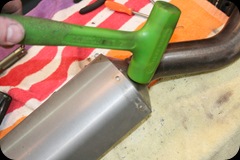 I used small taps with my mallet as I aligned the core with the end of the Can. It worked out well and didn’t leave any marks. 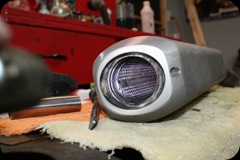 You can clearly see the core now is perfectly in place. 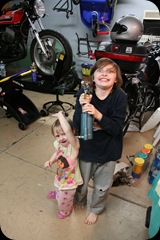 My son enjoying the power of a pneumatic rivet gun. 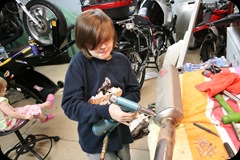 I used Aluminum rivets with a steel center, size 3/16” with a 1/4” grip. If I could of found a true stainless rivet that would of been my choice, but I never found any at the multiple stores I went to. 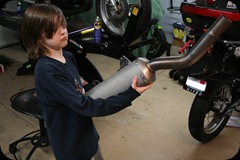 The finished product and looks good.

The repack kit was bought from Newenough.com and was under thirty bucks. Fifteen rivets was two dollars. Pretty cheap if you have to tools.

The biggest difference with the sound levels now is the raspy tone is gone when cracking the throttle open. We will see how long Two Brothers packing lasts. It would be nice to get fifteen thousand out of it.

Cheers and have a good holiday!!!!