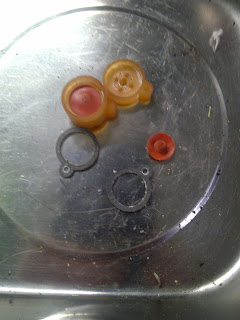 The daily commute was going fine until halfway home the KLR decided to give me the old dead throttle. Hmm, that's odd 175 miles and time for reserve? So I flip the petcock and leave the throttle closed for a few seconds and retry and it's kind of running. Another 1/4 mile down the road and she's done and a little panic comes over me as I have a kid at home that needs to be at a softball game in a hour. Anger also rushes in as a dead engine is not supposed to happen on a mechanics bike and with that rush of anger as the bike silently rolls down the big hill in the town I'm passing through, I give the gas cap a whack with my hand. I come to the bottom of the hill and jump off to look at the fuel filter and see gas rushing through it like I just turned it on after a rebuild. DAMN TANK VENT! Guess I have the old Fonzie touch as the whack must of unstuck the vent and it fired right up.

Once I had time I removed the cap and gutted it and pulled out these pieces. I could of just cleaned them up and gave them a shot of WD-40 but why? After 1K removed I have had no problems running.

Posted by FATTKAW at 5:58 PM No comments: