Kira’s first camping trip and were doing it in November!! :)

I’ve been waiting for the day when things work out to take one of the kids camping with the motorcycle. As luck played out we had great weather for the first week of November. 70 Degrees during the day and they said only 50 degrees at night, so they say! 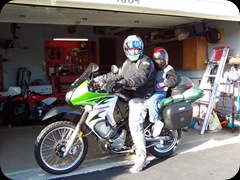 This is Kira my little wild nine year old. Getting her out of the house for a little will give the wife a huge break. For the ride we used a little cheap communicator I bought fifteen years ago when the wife would come along for rides. It still works as good as it did before.

My biggest fear of riding with a little one is her falling asleep and falling off the bike. The communicator would let me keep her alert and be able to point out things along the way. 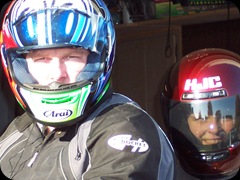 This is a good pic, me nervous and serious and her happy and excited to go. Nice huge smile out of her. :) 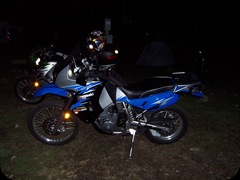 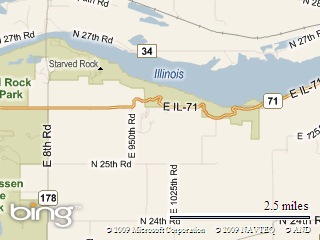 We showed up to the campgrounds at Starved Rock to find the park ranger gone but the sign stating there is vacancy. As we rolled through the grounds the only spot open happened to be a RV spot but someone had there blue reserve tag in for the spot. My understanding is your reservation is void if you don’t show up by 3PM. We rolled in at 4:30 so I took it as fair game. 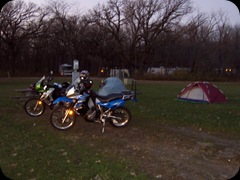 The bikes and the camp. Kira is popping out of the tent looks like a ground hog checking things out..

Pretty funny because around 8PM a RV rolled in and a lady jumped out and said she reserved the spot earlier. Jim and myself just said OK and moved the bikes off of the graved spot for them to park. They seemed a little ticked off but I really didn’t care, but they said we could still stay by the fire we had going. Gee thanks lady! I wasn’t going to move anyways!

We turned in for the night before 9PM, which is really early for me. I have a hard time going to bed before midnight. The nights sleep was a tough one. The forecast I read said a low of 45-50 degrees and man was that off. It was cold and I was scared for Kira getting Hypothermia. We had sleeping bags good for 50 degrees, so we wore our pants and shirts with a hat to bed. I think I may of slept a total of three hours. Constantly checking Kira and putting her hat back on. My temperature gauge read 38 Degrees when I came out of the tent in the morning. I couldn’t wait to see the Sun! :)

It was a rough night but the good side was hearing all the animals doing their thing. Some of it was Coyotes, a lot was one or a few Owls calling all night into the morning.

I heard some of this too. 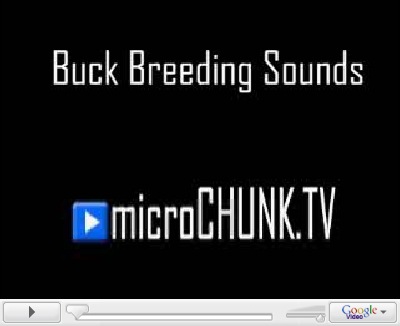 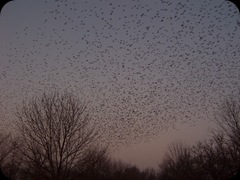 These bird were SO LOUD. I think they were Starlings going south. It almost sounded like a engine running even before you could see them by a lot. 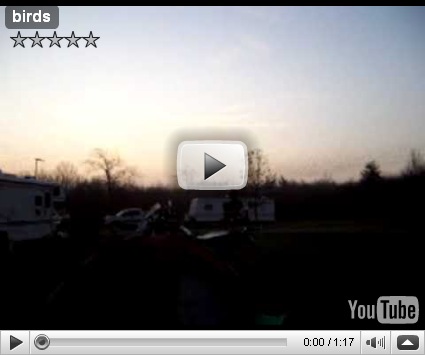 Sorry for the poor video as it’s from my crappy Kodak camera. This was about 6AM. After the birds went through I realized it woke up all the tent folks. 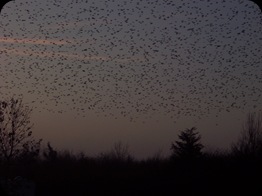 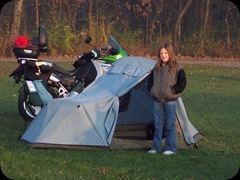 Kira and my tent. 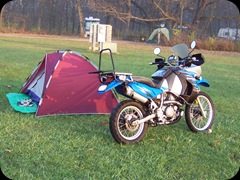 Jim’s bike and set up. 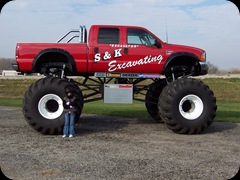 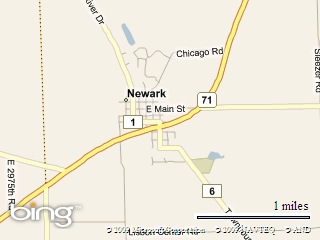 On the way home Kira’s said her legs were numb so I pulled off in Newark Il to see this truck I noticed on another ride. 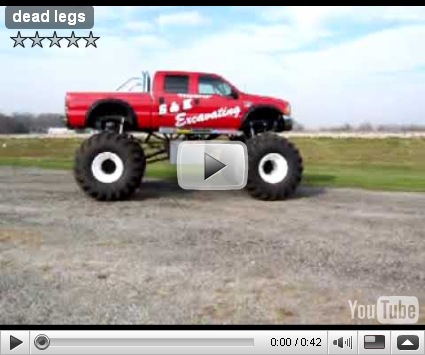 I made her run a few laps around the truck to get her legs going again. 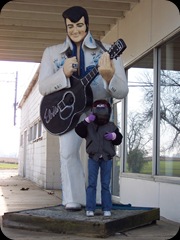 This ten foot Elvis is down the way from the truck. It’s been there forever so I also let her get a pic with it. 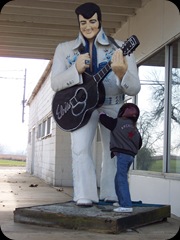 This is the Elvis nut shot I told her to do as a funny. My son thought is was great when I showed him at home.

The trip was good despite a bad sleep and nothing a nap at home didn't cure. ;) I’m looking forward to next riding season with Kira since this year is almost over for riding.